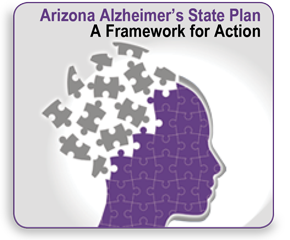 AHCCCS is an active member of the Arizona Alzheimer’s Task Force, a multi-organizational team convened in 2010 to develop plans to support the growing population of adults in our state who experience Alzheimer’s disease and other forms of dementia. Governor Doug Ducey endorsed the Alzheimer’s State Plan in 2015 and launched community Calls to Action in 2016. Currently, three AHCCCS staff members serve on various sub-committees, offering particular healthcare delivery expertise and broad support for insured and uninsured populations.

Facts about Alzheimer’s Disease and Dementia

Governor Doug Ducey has proclaimed November 2017 Alzheimer’s Awareness Month in Arizona in an effort to draw attention to the many resources in our state for individuals experiencing and living with dementia or caring for family members affected by the disease.

Resources for Individuals and Families

AHCCCS supports individuals experiencing Alzheimer’s and related Dementia and their families through the Arizona Long Term Care System (ALTCS) oftentimes in their own home by providing in-home care services such as attendant care respite care. ALTCS also provides residential or skilled nursing institutional services should the need arise. Learn more about eligibility for and services covered under the ALTCS program.

Can't find what you're looking for? Please visit the AHCCCS Document Archive.
Back To Top